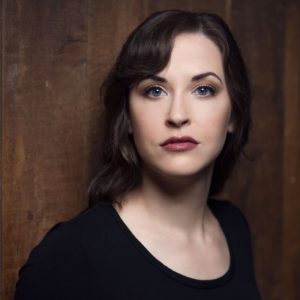 Praised by the Washington Post for her dramatic intensity and vocal ability, soprano Shannon Jennings is a previous Palm Beach Opera Benenson Young Artist, seen in the 2020 Festival as First Lady in Die Zauberflöte. Her 2019-20 season included her debut as the title role in Tosca with Annapolis Opera, debuts with the National Symphony Orchestra and Philadelphia Orchestra as the soloist in the world premiere of Oscar-winning composer Michael Giacchino’s ADVENT, and her recording debut with Death Waltz Records as a soloist in Giacchino’s first solo album, Travelogue Volume 1.

Shannon is an alumna of the training programs at Wolf Trap Opera, Santa Fe Opera, Pittsburgh Opera, the Merola Opera Program, Central City Opera, and Virginia Opera. A formidable competitor, she was a finalist in the 2019 George London Foundation competition, a winner of the 2017 Mildred Miller International Voice Competition, a Capitol District Winner in the 2016-17 Metropolitan Opera National Council Auditions, and a winner of the 2015 Annapolis Opera Vocal Competition.

In addition to her opera career, Shannon is an experienced educator in both private and group settings for classical, musical theatre, and jazz music. Originally from Orlando, FL, she holds a Bachelor of Music in Vocal Performance from Florida State University, and lives in Chesapeake, VA.