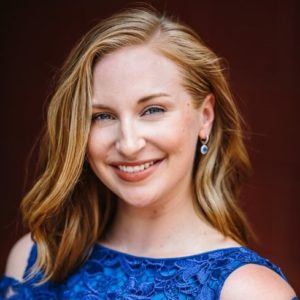 Praised for her “clear and attractive tones” by the Boston Musical Intelligencer, mezzo-soprano Megan Callahan garnered praise for her portrayal as the Fox in The Cunning Little Vixen (2019) with the Boston University Opera Institute. Most recently, she prepared the role of Sesto in Mozart’s La Clemenza di Tito with BUOI and performed in the chorus of Norma with the Boston Lyric Opera just before the COVID-19 pandemic. She also performed the title role in Tobias Picker’s Dolores Claiborne (2019) as well as the role of Gertrude Stein in Tom Cipullo’s After Life (2018) with BUOI. Ms. Callahan will join the Bailey Apprentice Artist program of Palm Beach Opera in January 2021.

Other notable stage credits include Olga in Eugene Onegin (2018), Helen Prejean in Dead Man Walking (2017), Frau Reich in Die lustigen Weiber von Windsor (2017), and Presendia in Dark Sisters (2017) with the Boston Conservatory Opera. Additionally, she has performed the role of Muhly’s Wife and covered the role of Ma Joad in Ricky Ian Gordon’s The Grapes of Wrath (2017) with the Opera Theatre of Saint Louis. Ms. Callahan has also appeared as Marian Paroo in The Music Man (2016) and Mother Marie in Dialogues of the Carmelites (2016). Ms. Callahan has performed with BUOI, Boston Lyric Opera, Opera Theatre of Saint Louis, Boston Conservatory Opera, Seagle Music Colony, Charlottesville Opera, and American Opera Projects.

Ms. Callahan is a recent graduate of the BU Opera Institute where she studied with Penelope Bitzas. Ms. Callahan holds a M.M. in Opera Performance from the Boston Conservatory (2018) and a B.M. in Voice Performance from UNC Greensboro (2016). Megan is an avid reader, classically trained pianist, and a passionate yogi.