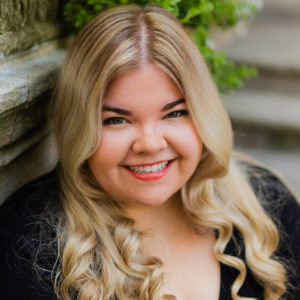 Award-Winning American Soprano Marissa Mischelle Moultrie is an active performer of opera, art song, concert works, and new compositions. This season, Marissa begins with Claire Devon
in Missy Mizzoli’s The Listeners, as well as excerpts of Mimi from La Bohème for the Seattle Opera Guild. Marissa will then be an Apprentice Artist at Palm Beach Opera during their
2021/2022 season, performing Olga in The Merry Widow and the Spirit in Dido & Aeneas. Marissa will additionally be covering Giannetta in L’elisir d’amore and Second Woman in Dido
& Aeneas, as well as studying Micaela in Carmen and Adina in L’elisir d’amore.

Last season, Marissa was a Young Artist at The Eurasia Festival, where she was meant to return to the role of Donna Anna in Mozart’s Don Giovanni. Marissa also made her professional New York City debut with New York Lyric Opera Theatre in the 2020 season, returning to the title role in Suor Angelica. Past full production engagements include Donna Elvira in Don Giovanni, the Title Role in Rusalka, Tatyana in Eugene Onegin, First Woodsprite in Rusalka, Gretel in Hänsel und Gretel, Fiordiligi in Cosi Fan Tutte, Countess Almaviva in Le Nozze di Figaro, Pamina in Die Zauberflöte, Donna Anna in Don Giovanni, Dido in Dido & Aeneas, the Title Role in Suor Angelica, and Minerva in Orpheus in the Underworld.

In addition to opera, Marissa is an accomplished choral singer and concert soloist. Recently, Gramophone UK highlighted Marissa, calling the recent recording of Eriks Ešenvalds
masterpiece Evening, “a glowing, harmonic melting pot.” Marissa was a featured soloist on the acclaimed album with Pacific Lutheran University’s Choir of the West, which was released on
Signum Records in January 2020. Marissa has performed the soprano solos in G. F Handel’s Dixit Dominus, Randol Alan Bass’s Christmas Flourish, Gustav Holst’s Christmas Day, and J.S
Bach’s Wachet Auf. Additionally, Marissa has performed the soprano solo in Haydn’s Kleine Orgelmesse, Hendrik Andriessen’s Miroir de Peine, and Haydn’s The Creation, among others.
She is a member of the Compostela Choir at St. James’ Church on the Upper East Side of Manhattan, and performs regularly with The Bach Vespers in Manhattan as well.

A graduate of Pacific Lutheran University, Marissa was a Mary Baker Russell Music Scholar and a recipient of the Deans Award of Excellence. Marissa holds a Bachelor of Music in Vocal
Performance and a Bachelor of Arts in Anthropology, as well as a Master of Music from The Mannes School of Music at The New School.