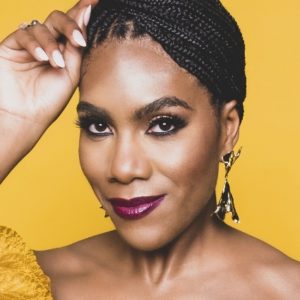 While the COVID-19 pandemic has forced the cancellation of Ms. Bridges’s engagements in the title role of Carmen at The Metropolitan Opera and Canadian Opera Company, she has emerged at this unique moment as a leading figure in classical music’s shift toward conversations of inclusion and racial justice in the performing arts. Bridges led a highly successful panel on race and inequality in opera with the Los Angeles Opera that drew international acclaim for being a “conversation of striking scope and candor” (The New York Times). Bridges also performed with the Los Angeles Philharmonic under the baton of Gustavo Dudamel for two episodes of the digital SOUND/STAGE series. Other upcoming highlights of Bridges’s 20-21 season include her role debut as Giovanna Seymour in Anna Bolena at Dutch National Opera.

Highlights from her 2019 – 2020 season included her highly-acclaimed debut at The Metropolitan Opera as Nefertiti in a sold-out run of Philip Glass’ opera Akhnaten, as well as a house and role debut with Washington National Opera as Dalila in Samson et Dalila. Bridges was also originally scheduled to sing the title role of Carmen at Dutch National Opera and was scheduled to make her debut with the Festival d’Aix-en-provence singing Margret in a new production of Wozzeck, conducted by Sir Simon Rattle, which were unfortunately cancelled due to the pandemic.

Other recent career highlights include her sold-out Carnegie Hall Recital debut, her role debut of Kasturbai in Satyagraha at LA Opera, her Los Angeles Master Chorale debut, and her debuts at Dutch National Opera and the Gran Teatre del Liceu in Barcelona. In addition, Ms. Bridges made her Carmen role debut at the San Franciso Opera, creating the role of Josefa Segovia in the world premiere of John Adams’ Girls of the Golden West at San Francisco Opera, her debut as Preziosilla in La Forza del Destino with Opernhaus Zürich, and performances as Carmen in the world premiere of Bel Canto, an opera by Jimmy Lopez, based on the novel by Ann Patchett at the Lyric Opera of Chicago.

Bridges is a recipient of the prestigious 2018 Sphinx Medal of Excellence Award, a 2016 Richard Tucker Career Grant, first prize winner at the 2016 Francisco Viñas International Competition, first prize winner at the 2015 Gerda Lissner Competition, a recipient of the 2013 Sullivan Foundation Award, a 2012 Marian Anderson award winner, the recipient of the 2011 Sara Tucker Study Grant, the recipient of the 2009 Richard F. Gold Grant from The Shoshana Foundation, and the winner of the 2008 Leontyne Price Foundation Competition. J’Nai completed a three-year residency with the Patrick G. and Shirley W. Ryan Opera Center at Lyric Opera of Chicago, represented the United States at the prestigious BBC Cardiff Singer of the World Competition and was a Young Artist at the Glimmerglass Festival in Cooperstown, New York.

A native of Tacoma, Washington, she earned her Master of Music degree from Curtis Institute of Music, and her Bachelor of Music degree in vocal performance from the Manhattan School of Music.