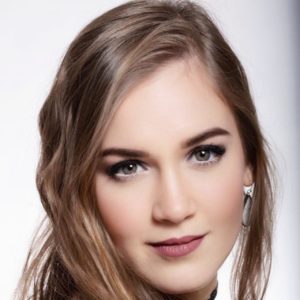 Argentinean-American soprano Jessica Wald has been performing on stage since the age of seven, having won a number of international competitions. She has recently performed the role of Proserpina in Monteverdi’s L’Orfeo and the full concert work of Lilacs by George Walker. In 2020, she portrayed the role of Olympia in Les contes d’Hoffmann by Offenbach with Rutgers University, where she graduated with a Master of Music degree in Opera Theater. In June 2019, she performed as Susanna in Mozart’s Le nozze di Figaro and covered the Queen of the Night in Mozart’s Die Zauberflöte with the Manhattan Opera Studio. She also performed Juliette’s Waltz from Gounod’s Roméo et Juliette for her Carnegie Hall debut. Moreover, she portrayed the roles of Morgana in Handel’s Alcina and June Jinkins in Dan Shore’s An Embarrassing Position at the Music Academy International Trentino Music Festival in 2018 and the Miami Music Festival in 2017. In 2016, she graduated with a Bachelor of Music degree in Vocal Performance from Florida Atlantic University. She has been a voice instructor for thirteen years teaching kids and adults how to use a proper vocal technique, act through their singing, and heal their voice with correct vocal health. She’s also been a cantorial soloist singing in Temples all over South Florida and Israel for fifteen years. Additionally, she has been working as a vocal sound healer helping people heal their physical, mental, and emotional problems with vocal vibrational frequencies.