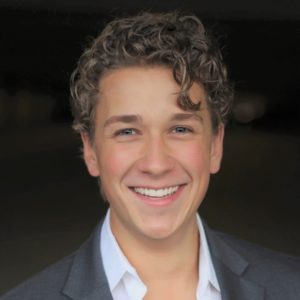 Ian Rucker is a baritone from Oshkosh, WI, under the tutelage of Carol Vaness. Ian graduated with his Masters’s Degree in Vocal Performance from Indiana University’s Jacobs School of Music last spring. He is coming to Palm Beach Opera after a summer as a Renée Fleming Artist at the Aspen Summer Music Festival. He lived in Aspen, Colorado for two months and was featured in weekly masterclasses, concerts, and recitals. It was there that he was able to work with many well-renowned performers, coaches, and conductors in the opera, classical music, and musical theatre community.

Ian was an avid performer at the Jacobs School of Music, being featured as Count Almaviva in The Marriage of Figaro in 2019, Figaro in The Barber of Seville in 2020, and most recently Papageno in The Magic Flute in September of 2021. It was at his undergrad at the University of Wisconsin – Eau Claire, under the instruction of Kenneth Pereira, that he found his love for the spotlight. He performed roles in both Opera and Musical Theatre productions: The title roles in both Don Giovanni and Sweeney Todd, Officer Lockstock in Urinetown, and Ernst Ludwig in Cabaret.

Within the past year, Ian has had some success in vocal competitions. He was awarded an Encouragement Award in the Metropolitan Opera National Council Audition – WI District, and took 1st place in the James Toland Vocal Arts Competition. He is glad to be back on stage performing for an audience. After such a hard year, it is such a breath of fresh air to see the arts alive and well!