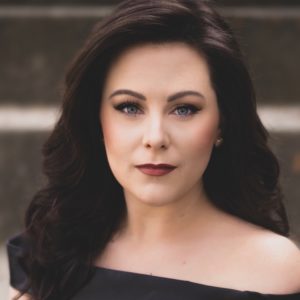 Regarded for the warm, luxurious texture of her voice and versatile, captivating nature as a performer, Avery Boettcher is a soprano from Appleton Wisconsin. Most recently, Ms. Boettcher was seen performing the role of Violetta Valéry in an excerpt of La Traviata in Opera Theatre of St. Louis’ Center Stage concert during the 2021 summer festival season as a member of the Gerdine Young Artist Program. Additionally in her time as a GYA, Ms. Boettcher had the privilege of covering world-renowned soprano Patricia Racette in her self-directed production of Poulenc’s one-woman opera La voix humaine.

Despite many cancellations and postponements, the 2020/21 season held two role debuts for Ms. Boettcher; Pamina in Opera North’s production of Die Zauberflöte and Woglinde in Michigan Opera Theatre’s innovative adaption of Wagner’s Götterdammerung (Twilight Gods), which the New York Times hailed as a “great triumph”.

Ms. Boettcher’s journey as an opera singer began at Viterbo University in La Crosse Wisconsin where she earned her bachelor’s degree, and continued at Indiana University’s Jacobs School of Music where she pursued her master’s degree. During her time at the Jacob’s School, Ms. Boettcher studied with world-renowned soprano Carol Vaness whose guidance continues to be instrumental in her growth and development both vocally and professionally. In IU Opera Theatre’s mainstage productions, she debuted the roles of Donna Elvira in Don Giovanni and Adina in L’Elisir d’Amore. Additional roles she honed whilst at IU are Juliette in Romeo et Juliette, Marguerite in Faust, Giulietta in I Capuleti e i Montecchi, and Magda in La Rondine.

From Indiana, Ms. Boettcher took her next step into the professional opera industry by joining the Studio Artist roster with Michigan Opera Theatre as the company’s resident soprano for the duration of their 2019/20 season. In the fall of 2019 she opened the season by performing the role of Zerlina in MOT’s mainstage production of Don Giovanni; a performance which Opera News regarded Ms. Boettcher as “sweet, bubbly, and a joy to watch.” In the spring of 2020, she performed the role of Lauretta in Gianni Schicchi and Michael Ching’s Buoso’s Ghost, praised by Encore Michigan for possessing “a genuine sweetness and perfect tone” in delivering the character’s iconic aria “O mio babbino caro”.

Ms. Boettcher spent two valuable summers with the Aspen Music Festival, performing a wide array of works on both the opera and concert stage. Concert works included John Harbison’s Mirabai Songs, Mahler’s Symphony No. 4., and performing as the featured soloist for the annual AMFS Benefit Gala. On the opera stage, she debuted the role of Countess Rosina in Le Nozze di Figaro, as well as presenting excerpts from Rigoletto, Cosi fan tutte, La Traviata, and L’Elisir d’Amore in the Aspen Opera Center’s series of Opera Scenes Concerts. She also had the pleasure of performing the title role in an excerpt from Massenet’s Manon in an orchestral masterclass concert led by world famous soprano Renee Fleming and acclaimed conductor Patrick Summers.

In 2020’s summer season, Ms. Boettcher was scheduled to join Opera Theatre of St. Louis as a Gerdine Young Artist where she would cover the title role in Carlisle Floyd’s Susannah as well as Lily in Tobias Picker’s new opera Awakenings. Regrettably, the season was cancelled due to COVID19, but Ms. Boettcher was fortunate to join the other Gerdine Young Artists in a virtual program presented by OTSL which provided intensive individual sessions with renowned singers and coaches from around the world, as well as publish featured performance materials through their online Front and Center series.

Recently on the concert stage, Ms. Boettcher has performed and array of works with orchestras around the world; some contemporary pieces including Fredrik Sixten’s Requiem and Tarik O’Regan’s Triptych with the Milwaukee Bel Canto Chorus, along with more classical works such as a semi-staged concert production of Die Zauberflöte with the Indianapolis Symphony Orchestra as Zweite Dame, Mozart’s Requiem with the Carmel Symphony, Handel’s Messiah with the Cairo Festival Orchestra in Egypt, and a selection of popular opera arias and ensemble scenes in a concert with the Detroit Symphony Orchestra.

Awards and scholarships Ms. Boettcher has received include the Artistic Excellence Fellowship, the Mavis McRae Crow Scholarship, and the Wilfred C. Bain Scholarship from Indiana University, the Helen & Lynton Caldwell Memorial Award and the first place prize Career Grant from the National Society of Arts and Letters in their vocal competition. She has also received the third place prize as a Regional Winner in the Central Region of the Metropolitan Opera National Council Auditions and the third place prize in the Emerging Professional Division of the International Classical Singer Competition.  In 2021, Ms. Boettcher was selected as a semifinalist in the Lotte Lenya Competition, a finalist in the Partners for the Arts Competition, a finalist in the Music International Grand Prix Competition, and the First Place Grand Prize Winner in the MIOpera Vocal Competiton.

The 2021/22 will see Ms. Boettcher joining Palm Beach Opera’s roster as a Benenson Young Artist for an exciting season, where she will debut the role of Belinda in Purcell’s Dido and Aeneas, Frasquita in Carmen, cover Adina in L’Elisir d’Amore, as well as covering Valencienne in The Merry Widow.