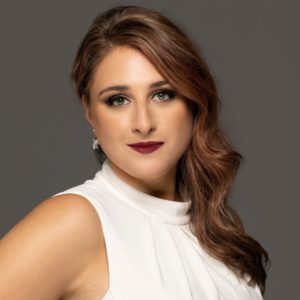 Soprano Alexandra Razskazoff is acclaimed by the New York Times as a “richly faceted, slinky soprano,” whose voice is “…ample in size with an intriguing instrumental color,” (Opera News).
In the 2021-22 season, Alexandra will make her debut as Suzel in Teatro Grattacielo’s production of Mascagni’s L’Amico Fritz. She will also appear in concert with Maryland Opera and with Bozeman Symphony where she will perform Beethoven’s 9th Symphony.

In Washington Opera Society’s 2019 fall season, she performed the role of Lisa in Lehár’s Das Land des Lächelns. She also appeared with Maryland Lyric Opera at their 2019 gala, singing scenes from Faust, Fidelio and Der Rosenkavalier with orchestra.

Alexandra was a Resident Artist at The Academy of Vocal Arts in Philadelphia in 2017-18, where she performed Violetta (La Traviata) where she studied with William Stone. She performed Handel’s Messiah with the Columbus Symphony 2018. Alexandra was a Resident Artist with the Minnesota Opera for their 2016-17 season, where she sang Wellgunde (Das Rheingold) and Musetta (La bohème). She participated in the Merola Opera Program in 2017, where she performed as the leading ladies in scenes from Lucrezia Borgia and I Pagliacci. She was an Apprentice with the Santa Fe Opera in 2015, and accepted their invitation to return in 2016 to cover Donna Elvira (Don Giovanni). Alexandra spent summer 2013 at Music Academy of the West, where she performed Erste Dame (Die Zauberflöte). In 2018, Alexandra took 1st Prize in AVA’s Giargiari Bel Canto Vocal Competition, and 2nd Place in the Mario Lanza Competition in Philadelphia. In 2014, Alexandra took 2nd Place in the Mid-Atlantic Region of the Metropolitan Opera National Council Auditions and received 3rd Place in Houston Grand Opera’s Eleanor McCollum Competition in 2016.

Academic credits include a reprise of Erste Dame (Die Zauberflöte) and Contessa (Le nozze di Figaro) while at The Juilliard School, where she earned her M.M. in vocal performance from 2014-16
under Robert C. White Jr. At the Peabody Conservatory, where she received her B.M. in vocal performance from 2010-14 under Dr. Stanley Cornett, she sang Blanche de la Force (Dialogues des
Carmélites), Donna Elvira (Don Giovanni), and Abigail Williams (The Crucible). Alexandra is a grateful recipient of the Novick Career Grant generously provided by The Juilliard School.