Today, Madama Butterfly is one of the most adored stage shows in any opera company’s repertoire. Around the world, its appearance on a season schedule incites anticipation and excitement within the local arts community. But the immense popularity of this production nowadays is a stark contrast to its awkward beginnings on the original opening night over 100 years ago.

After the unqualified successes of La Bohème in 1896 and Tosca in 1900, the Milanese society at the famous La Scala opera house was expecting big things from the premier of Giacomo Puccini’s latest effort in 1904, Madama Butterfly. 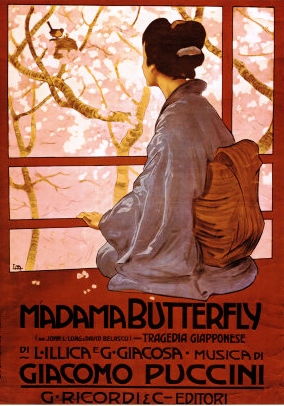 The bubbly and glamorous Rosina Storchio, a crowd favorite, was cast as the lead soprano and she opened the show with an energetic prelude in her role as Cio-Cio-San. But instead of the anticipated uproar of applause and “bravas!” from the audience, there was only the deafening sound of silence. Crickets. A rare response, indeed, from the normally fervent La Scala crowd.

The rest of that night at the opera didn’t go much better. Puccini was distraught, to say the least. So much so that he cancelled the remaining shows in Milan, refunded the money he had been advanced, and took his musical score back to the proverbial drawing board.

Several months later, the revised version was relaunched in Brescia, led by Maestro Arturo Toscanini. This time the performance duly wowed the audience. More than wowed them, they were overcome by the emotion of the music and the passion of the singers’ voices. There were boisterous cheers, prolonged rounds of applause, and repeated calls for encores!

The precise reasons for the lukewarm opening night have never been adequately explained. Suffice to say, whatever issues that had cursed the premier performance have long since been worked out. According to OperaBase, Madama Butterfly was the #5 opera in the world for the 2014-2015 season; right behind another one of Puccini’s blockbusters, Tosca.

The Plot of Madama Butterfly

The storyline of this opera is taken from a play that Puccini had seen in London during the summer of 1900. An American naval officer, B.F. Pinkerton, stationed in Japan meets a young geisha named Cio-Cio-San (a.k.a. Madam Butterfly), and a romance quickly flourishes. A marriage is hastily arranged, and Butterfly is scorned by her family for giving up her religion to marry an American.

In Act II, we find the young bride alone in her home, awaiting the return of her sailor who has been taken away by his military duties for three years. We feel the painful longing in her famous aria, Un bel di’ (“One fine day”). Finally, a canon booms in the harbor, signaling the return of Pinkerton’s ship. Butterfly waits throughout the night for her husband to return to their house and meet his young child for the first time.

Alas, when Pinkerton finally reaches the house the next day, he is accompanied by Kate, his American wife. As you might imagine, this situation can only end badly. And it does, but not before enchanting the audience with some of the most haunting music in all of opera.

Madama Butterfly at the Kravis Center

For both the aficionado and the more casual enthusiast, Madama Butterfly provides pure joy and entertainment with its captivating storyline and famous arias. It’s sexy, it’s tragic, and it takes you on an emotional rollercoaster ride that will stay with you long after the orchestra plays the last note.

The cast of this year’s Palm Beach Opera production at the Kravis Center in West Palm Beach features Inna Los and Alexandra Loutsion dividing the role of Cio-Cio San, while Scott Quinn and Adam Diegel split duties for the role of Pinkerton. Zanda Svede will interpret Suzuki, and Luis Ledesma returns to Palm Beach Opera as Sharpless.

Three of the Benenson Young Artists will take the stage in major roles, as well. Jessica Fishenfeld appears as Kate Pinkerton, Joshua Conyers as Yamadori, and Andrew Simpson as the Commissioner.